J5 in one minute

J5 is a hub comprising:

High-level ventures which prominent public or private actors undertake are subjected to multiple success factors and, conversely, risks of failure. Their complexity is compounded by the acceleration of social and geopolitical transformations, by the persuasive and mobilizing force of multiform information and by the ongoing legal creativity of the international system on different scales, national, bilateral and multilateral.

Today, strategic and high-level ventures benefit from a range of leading-edge tools and emerging technologies running from viral marketing to artificial intelligence as well as data mining and cyber-lobbying, expert systems and automated publishing.

So, mastering a global influencing strategy requires both a clear vision of the synergies between the technical means and a keen sense of societal trends, of the political balance of power, of economic variants and multicultural sensibilities. Consequently, this strategy must be able to deal 360° and in real time with all of a venture’s parameters, including managing costs, deadlines and unforeseen circumstances.

At such a level of complexity, of volatility and of stakes, only experience can guarantee that mastery.

To address these stakes, J5 is a hub comprising:

We have over 30 years’ experience in strategic ventures and the practice of all associated professions and tools. Thus, to the creativity of our strategies and fire power of our tools we can add a matchless guarantee of execution which only a small number of professionals in the world can claim.

J5 offers a high-level and tailored service through an « out-of-the-box » approach resting on a pluri-disciplinarity of professions, in order to accompany its clients in all the challenges they face (political, economic, professional, personal).

Accordingly, J5 has developed a multi-intelligence, integrated platform which allows us to play a part in the most complex and difficult cases, upstream (planning and anticipating) as well as downstream (reacting to constraints faced by our clients, managing crises).

We have at our disposal a vast, sturdy, eclectic network, French and foreign, which has strengthened in the course of three decades of practice. According to the case’s complexity, J5 proposes to its clients collaborating with other partners so as to mobilize all useful expertises (professions of economic intelligence, digital influencing and online mobilization, cybersecurity, attorneys, etc.) and form a team adapted to their needs.

J5 has endowed itself with several potent partnership poles in domains critical to the indispensable securing of strategic ventures’ success in a world of ceaselessly-proliferating complexities and risks :

Our values and commitments

Confidentiality, detail-orientation,  proactive engagement, creative strategy and diversity of expertise are at the heart of J5’s identity.

J5 is independent of any affiliation and political objective. Playing a part in a sensitive area of activity, essentially within the framework of strategic missions, J5 commits to abiding by strict legal and ethical standards, ensuring that all its employees and partners act in full respect of the laws and regulations in force in the countries on which they operate. 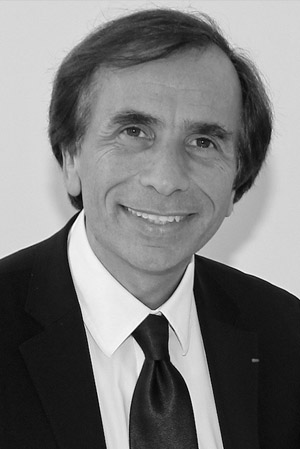 Founding president of J5, Gérard Askinazi is a specialist in public, political or corporate communication and in the organization of public events and large international conferences.

For over 30 years, he has advised States, institutions, companies and personalities as regards strategic positioning, image and visibility. Thus, he has taken part in numerous political campaigns on all continents and also worked for large groups in the world of industry and services.

Moreover, Gérard Askinazi has organized the great political and economic global gatherings, within the organizations he headed.

Notably, he participated for several years in the organization of the Davos World Economic Forum and those of New York, Amman and Sharm El Sheikh. He organized many events and conferences during the French presidency of the European Union as well as other prestigious occasions such as the World Policy Conference, the 20th anniversary of the fall of the Berlin wall, the Global Sports Forum of Barcelona, the G20’s ministerial meetings.

He also organized the ceremonies inaugurating the new Suez Canal, the festivities of the UNESCO’s 70th anniversary, the Summit of the French-speaking world in Madagascar as well as the COP22 in Marrakech.

He cofounded the Forum Nouveau Monde in partnership with the OECD, which assembles the principal political and economic leaders.

Former vice-president world of Publicis Events then president of one of Havas-Euro RSCG’s subsidiaries, Gérard Askinazi was the founding president of Agence Publics and vice-president of the board of directors of Groupe ESL & Network, of which he is today one of the shareholders.

He is counsellor for foreign trade of France and knight in the order of the Legion of Honor.

Eric Besson is a former French Minister. Today, as a specialist of industry policy and forward planning strategies, he focuses his work on corporate strategies, international investment and deal advisory, Government relations and public affairs.

Graduated from “Sciences Po” where he studied law, business and political sciences, Eric Besson spent more than 15 years in the private sector (industry, media, executive search business and non-profit foundation). He held several ministerial positions within the French Government for 5 years, between 2007 and 2012, under Nicolas Sarkozy’s presidency.

His fields of expertise are Industrial policy & long-term investments :

as well as Forward planning :